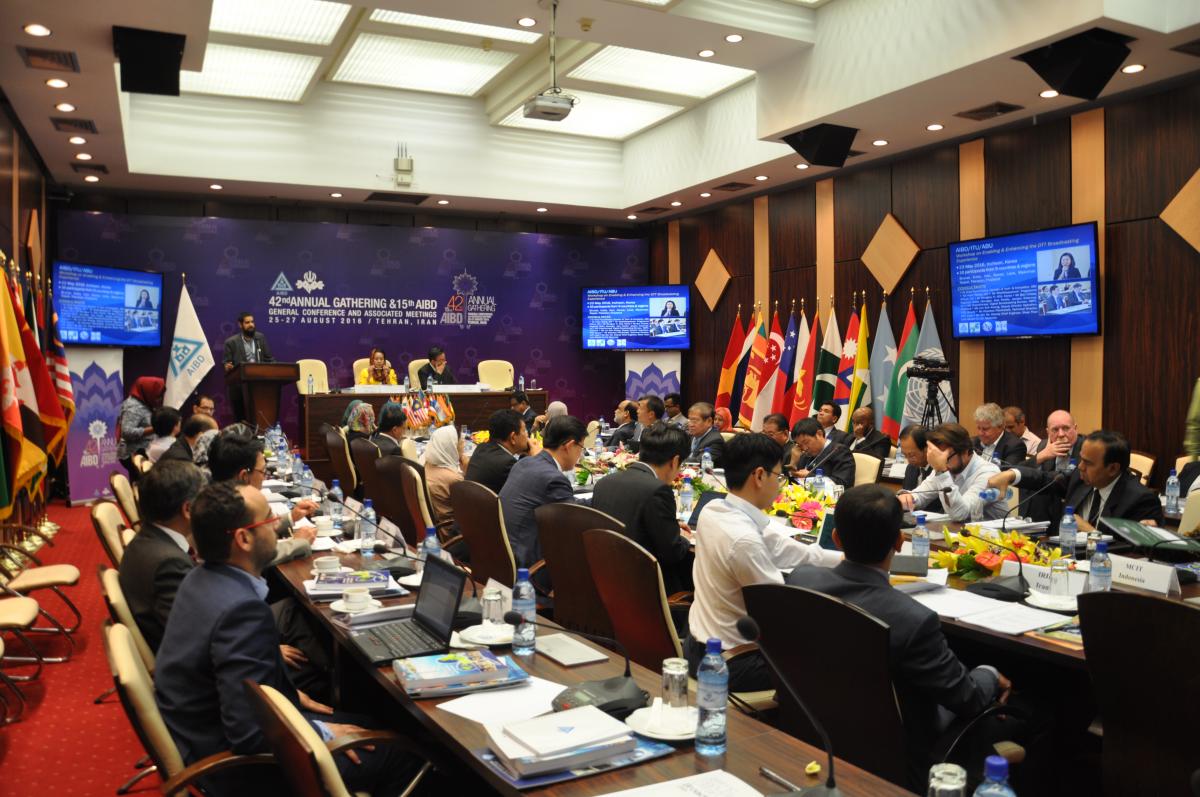 In his opening remarks, Mrs Niken, President of the General Conference, urged members to review the Institute’s performance and recommend ways to ensure a more meaningful future, one that meets the training needs of member countries and demands of a sustainable Institute.

In his presentation to the GC, AIBD Director Chang Jin reported on the successful conclusion of the Asia Media Summit in Incheon, Korea for 24 to 26 May 2016. More than 400 delegates from 50 countries and regions from Asia-Pacific participated in the two-day conference. Focusing on “New Horizons for Media Content: Asia & Beyond,” the AMS provided invaluable insights into the theme and discussed ways to revitalise, reenergise and reinvent the dimensions for quality media content.

He highlighted the implementation of 33 training workshops in the region from 1 July 2015 to 30 June 2016. These activities focused on training dealing with radio and TV production, children’s rights, disaster risk reduction and new media. Close to 700 broadcasters from member countries benefitted from these workshops.

Mr Chang Jin also reported on the initiatives dealing with the UN-led 17 Sustainable Development Goals adopted by world leaders during a UN Summit in September 2015. Given its limited resources, the Institute will cover only 8 of the 17 SDGs aimed at ending poverty, protecting the planet, and ensuring prosperity for all. Each goal has specific targets to be achieved over the next 15 years. He identified more than 40 member organisations and global partners with whom AIBD expects to collaborate to implement the SDGs project.

On memberships, AIBD was able to recruit one new affiliate member during the year, Whitewalls Systems Pte. Ltd., Singapore. To date, it has 101 full and affiliate members, representing 48 countries and regions. The Institute plans to publish a list of members covering their profile and major activities.

The Institute’s newest project is the AIBD Annual Media Research. Approved by the GC in 2015, the research project pursued three surveys: a national media survey to generate statistics on the overall broadcasting scenario; a broadcaster review survey to identify members’ operations and transmissions, as well as use of social media networks; and the audience consumption survey to determine consumption habits in both traditional and new media.

On human resource development, Chang Jin reported on the recruitment of three additional programme managers to beef up the Institute’s workforce in implementing various training workshops and seminars in the region.

He also said the secondment programme is on track to enable members to participate directly in the daily work of AIBD operations. BB Bangladesh has nominated the Deputy Director of External Service for secondment to AIBD.

‘AIBD”s financial performance was also presented for the GC approval. It highlighted its current financial standing and arrears from members. Director Chang Jin said the Institute’s performance with its corresponding funding would not have been possible without the efforts and contribution of all member countries, affiliates and partners.