Asia Pacific – a Promising Region for Media Business and Broadcasting

India’s Prime Minister Modi says Asia Pacific has emerged as one of the most promising regions for media business, especially the broadcasting sector, and offers opportunities for international cooperation ranging from technology partnership to sharing of successful strategies of inclusive communication.

“Our eventual aim shall be to deepen the media and democratic space in the region”, the Prime Minister stressed.

He delivered this message to participants of the 15th Asia Media Summit (AMS) in New Delhi, which was read out by AIBD Director Chang Jin during its closing ceremony on 11 May 2018.

The Indian leader also  praised the theme “Telling our stories- Asia and more” as conveying the noble aim of the summit, of giving voice to the whole population in the region.

Mr Chang said this summit has unleashed, according to Prime Minister Modi, “a new spirit for creative collaboration, for a better and more effective media partnership in the region, and new initiatives for future of the media in our region”.

Ministers of Information from Bangladesh, Cambodia and Korea and more than 60 speakers from the Asia-Pacific region and other parts of the world and the host country India deliberated deeply and thoroughly on the various topics of the summit.

Alongside the proceedings of the summit, there were also discussions for more cooperation among member countries of AIBD and partners in the region and the world.

“Specific suggestions were made on improvement of media policy for better and fairer society, concerted efforts in the SDGs, and setting-up of new regional mechanisms of media content exchange“, Chang Jin said.

He thanked host India, members and delegates for continuing to support the summit, saying it has “grown up and become one of the premiere platforms in Asia-Pacific to discuss and debate the most important current topics of the industry”.

The AIBD Director also said the Institute plans  to explore new dimensions and opportunities in the fast changing expressions in media industry through a collaborative and inclusive network and contribute to the growth of this industry in the rich cultural heritage of the Asia-Pacific region. 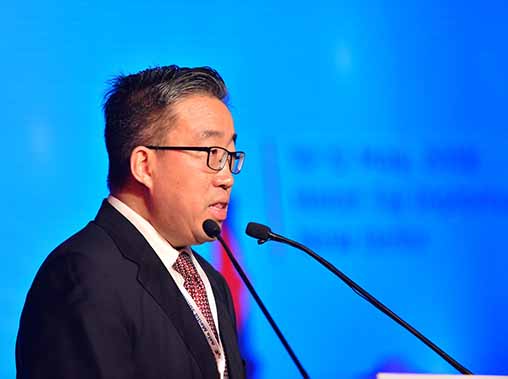