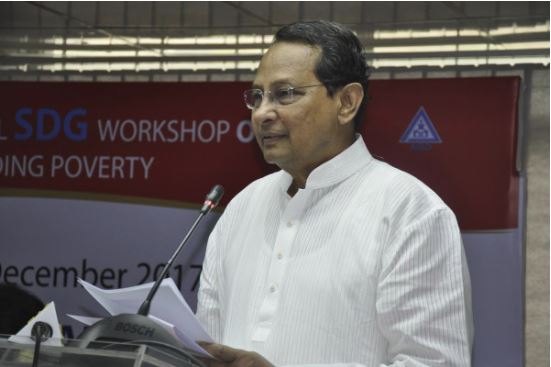 Ministry of Information, Government of the People’s Republic of Bangladesh

-Senior Officials of the Government and AIBD,

-My friends from Media, Ladies and Gentlemen,

As-salamu alaikum and very Good Morning to you all.

First of all, I like to extend my earnest felicitations to the organizers of this SDG Workshop for Broadcasters. At the same time, I warmly welcome all participants from our neighboring countries Afghanistan, Bhutan, India, Maldives, Nepal and Sri Lanka.

We all agree that freeing the world from poverty is a prerequisite for sustainable development, and it is time for media to act in the frontline.

– Aiming at eradication of poverty and imbalances in gender and economy.

At the same time, we are pledge-bound to pursuit adaptation and mitigation policies to cope with climate change and to reduce disaster risks, so that calamities cannot erode the developments we attain.

To tell you in short about Bangladesh, I would say, in South Asia, we are first in Readymade Garments exports, second in Foreign Exchange earning and third in Life Expectancy. I must also mention that our land, the largest delta on Earth is crisscrossed by about 700 rivers. With highlands and evergreen forests in the northeast and southeast, we also have islands, a coral reef in the Bay and the longest natural sea-beach in Cox’s Bazar. Bangladesh is also a home to the largest mangrove forest in the world – the Sundarbans where you can find the critically endangered Royal Bengal Tigers, our national animal.

If we look at ourselves carefully, we find to be sitting on three dangerous bombs. They are:

-The terrorism bomb and

Diffusion of `Poverty Bomb’ is the key to address the other two bombs as well. It is the poverty-free world that can lead us to peace, communal harmony and gradual extinction of nuclear bombs and warheads from earth.

The great Nelson Mandela said- `While poverty persists, there is no true freedom.’

Therefore, when poverty proves to be the root cause of social instability, we have no alternative to facing it with everything we have, and media, if properly wheeled, can be one of our best weapons for poverty alleviation.

Because, with the evolvement of ICT-based New Media, the Social Media along with the Television, Radio, Online, Print and Movies, media has become a strong and worldwide force to partner the development of civilization.

Before we assign media, especially the Broadcasters for the hard task, I like to call upon the media to focus on the paradigm shift of the world from so-called `Market Economy’.

Now the States, acknowledging the social needs, are re-defining their role and coordinating market forces, entrepreneurs and citizens. It creates a four-dimensional Political Economy.

All four dimensions approach together to harness the Market Economy in order to address the social needs.

In order to attain best results of this paradigm shift to end poverty, it is the time that the broadcasters are to focus and reflect on:

1.    How much are the people empowered?

3.    How much they are aware, motivated and activated.

4.    How the government and international community are facilitating the above, three issues?

Because, those mark the people’s level of participation in development, and there is no alternative to the participatory process to attain inclusive growth.

The 55th Commission for Social Development of the UN Department of Economic and Social Affairs, in their High-level Panel discussion on `The Role of the Media in Promoting Strategies for Poverty Eradication’ this February revealed that-

`Today, some 1 billion people live in extreme poverty and more than 800 million endure hunger and malnutrition. ….and media has a big role to get them out of poverty.’

On the other hand, the first point of Sustainable Development Goals –SDG calls for- `An end to poverty in all its manifestations by 2030.’

As we do not want a single person to live poverty-sicken life, and poverty is entwined with issues like imbalance in gender and economy, climate change, disasters and so on, I propose a 10-point agenda to engage Broadcasters for Ending Poverty:

6.    Open public forum and let the poor to express their views utilizing the Social Media

8.    Train the journalists on addressing poverty and on Information Communication Technology

9.    Engage Media Specialists to find new avenues for Broadcaster’s role for `No Poverty’

10. Shed light on works of state and non-state actors on poverty eradication. 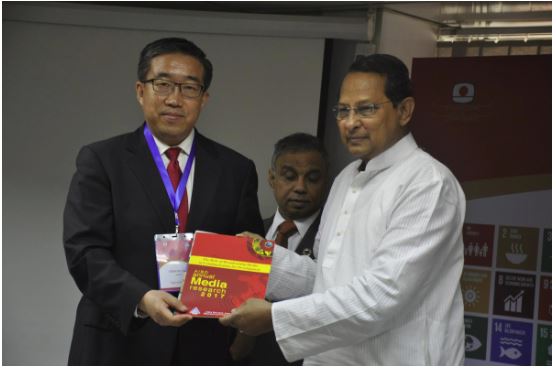 Having said that, I must mention that, every nation has its own way of rule and rise. Yet all nations agree on one point- `To end poverty’.

Bangladesh under the leadership of Prime Minister Her Excellency Sheikh Hasina introduced `Community Radio’ adding a new dimension to the country’s flourishing media sector to fight poverty and uplift rural lives. A number of 17 community radios are now giving voice to the voiceless people across the country.

We believe in democracy void of terrorism and corruption, prosperity void of poverty and discrimination.

Let all South-Asian nations work together, involving respective media, and come up with specific road maps by 2020 and join together to uproot poverty ahead of the SDG timeline of 2030.

Let us all stand together with all Broadcasters and join hands to say good-bye to poverty from our mother earth. Thus I once again thank the Asia-Pacific Institute for Broadcasting Development (AIBD and Bangladesh Television and wish all success of this Sub-Regional SDG Workshop for Broadcasters  on Ending Poverty. 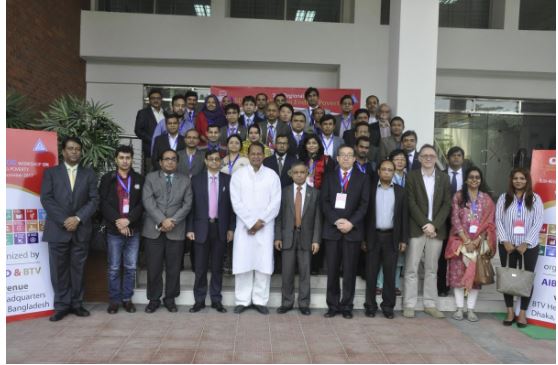