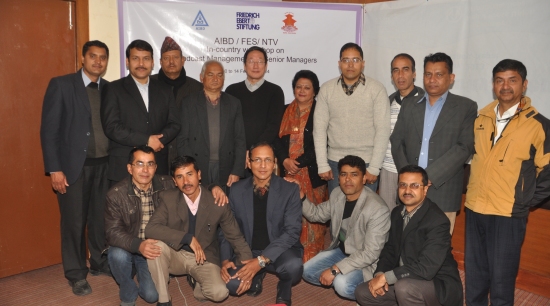 Thirteen veteran managers from Nepal TV and Radio Nepal participated in the 5-day workshop which focused on the core elements of successful management and programming strategies. The work experience of the participants ranged from 10 to over 30 years.

The TV market of Nepal is over-crowded, with 32 terrestrial TV stations plus more than 70 cable TV channels, most of which are foreign TV channels from India. NTV performs dual roles, a national TV established by the Government and a Public Services Broadcaster. Under such situation, NTV faces a dilemma between competing against commercial sectors for advertising revenue on the one hand and providing information and publicity for the public on the other hand. Both the staff from NTV and Radio Nepal was eager to seek for a magic formula to overcome the dilemma.

Dr. Kwai-yeung Cheung, Former Head of Training at Radio Television Hong Kong (RTHK) was the consultant of the workshop. During the workshop, he has interacted with the participants on many occasions. The participants were divided into three teams with members of different professionals, including staff from News, Engineering, Business and Administration Departments. It was a good mix. Whenever the consultant raised a question, the teams were able to generate different perspectives for discussion. Throughout the entire workshop, participants actively engaged in discussions and there was passion of the veterans, for example, when the consultant mentioned to the group the “magic formula” applied by the US local TV stations, the News Director of Radio, Mr. Khagendra Khatri said the day after that he had applied the “magic formula” in his newsroom. The consultant was very impressed that the participants could apply successful models in their daily operations, which is the spirit of the workshop: turn knowledge and skills into action.

General Manager of Nepal Television Mr. Laxman Humagain distributed the certificates to the participants at the closing ceremony. AIBD Director Yang Binyuan has strongly urged broadcasters to move away from a business as usual attitude and adapt to the challenges and opportunities posed by social media and the emerging media platforms. For broadcast training institutions to be attuned and responsive to the demands of new media and social media, they need to form task forces that will facilitate exchange of trainers and experts, offer a more modularized and interactive type of training curriculum relevant to broadcasters’ needs and establish a web-based management protocol or a ‘brokerage’ of sort that facilitates generation of training data and regional exchanges and collaboration.

Need for a Responsive Training Curriculum

Mr. Steve Ahern, CEO of International Media & Broadcasting Academy (IMBA), Australia has called for a restructuring of the training curriculum for broadcasters, one that is based on new technology, audience consumption trends and workflow. Any effective curriculum models for social media-based training must start with the audience and an understanding of what motivates them towards social media and related interactions. Max Villandre, Publishing Director, IGN ASIA, Malaysia advised broadcasters to engage with their audiences, saying they have alienated themselves from viewers and listeners, and this may result in losing them more. Media Who Connect to People Will Win

Dr. Joanne Lim Bee Yin, Deputy Director of the Centre for the Study of Communication and Culture, University of Nottingham, Malaysia, says in a networked world, media whose primary value lies in its ability to connect people will win and practitioners need to listen and connect more with them.

Increasing Social Media Use and Reach

The Korean Broadcasting System (KBS) is increasing its interaction with its audiences, no matter what devise they are utilizing, as one of three key strategies the organisation has employed to increase its social media use and reach. Two others include focusing on training and improving social media skills, and making social media a priority equal to its outreach strategies.

The session is exclusively devoted to provide opportunities for those participating for making direct contacts and interacting with those who have similar interests and issues in broadcast training to help build relations that will reap current or future benefits either individually or for collaborations for their broadcasting or training organisations.

Curriculum models for Internet and social media-based education and training call for appropriate learning environment, content materials and educational instruction based on learning objectives and learner needs. These must include design principles and implementation strategies that require flexibility, diversity, participation and dialogue, fieldwork, and project demonstration. Can broadcasters in Asia-Pacific adopt a one-size-fit-all curriculum model to facilitate training and learning?