Home>News >UNESCO’s Global Forum on Media and Gender: Towards a Global Alliance UNESCO’s Global Forum on Media and Gender: Towards a Global Alliance

The first-ever Global Forum on Media and Gender: Towards a Global Alliance organised by UNESCO was held from 2 – 4 December 2013 in Bangkok, Thailand. The purpose of this event on gender equality and media was to initiate processes that will link up to ongoing actions and add momentum to gender equality and women’s empowerment in and through the media.

The first-ever Global Forum on Media and Gender: Towards a Global Alliance organised by UNESCO was held from 2 – 4 December 2013 in Bangkok, Thailand. The purpose of this event on gender equality and media was to initiate processes that will link up to ongoing actions and add momentum to gender equality and women’s empowerment in and through the media. 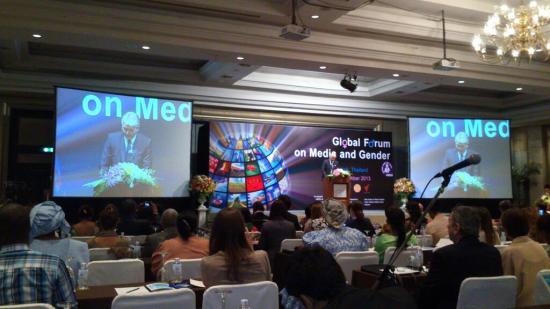 The conference was inaugurated by Mr. Chaturon Chaisang, Minister of Education in Thailand. The special address was given by Mr. Janis Karklins, Assistant Director-General for UNESCO’s Communication and Information Sector, which was followed by addresses by various high-ranking representatives from UNESCO’s international partners.

The global forum was a pioneering event that aimed to address gender equality and women’s empowerment in and through the media to contribute to achieving Millennium Development Goal on “promoting gender equality and empowering women”. It enabled worldwide stocktaking and debate through high-level sessions to debate on challenges faced by international, regional and national programmes on gender and media to encourage shared experiences. 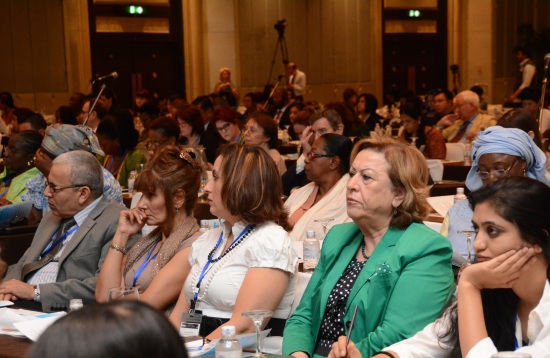 Mrs. Manil Cooray, Deputy Director of AIBD represented the Institute and spoke on the given theme “current research on gender and communication“. She emphasized the training needed for those in the media and research as a requirement and a crucial factor to evidence–based policy formulation for capacity building. Citing one example she cited AIBD’s research based publication “Broadcasting for All: Focussing on Gender”. As a unique inter-governmental organisation AIBD had developed this publication after having done research from the broadcasting organisations of its members. This is a guide for production of diverse programme content maintaining gender balanced approaches and perspectives which was a valuable resource for training of broadcasters. 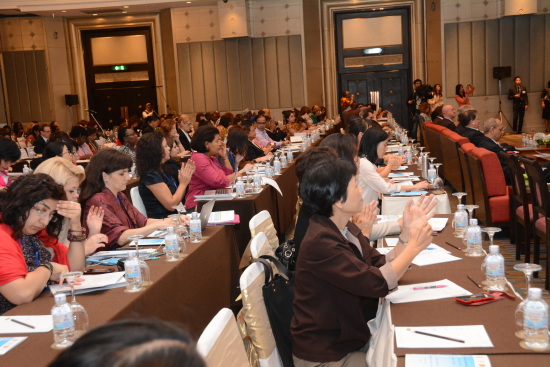 The conference’s final statement defines GAMG’s overarching mission as “We are committed to gender equality and women’s empowerment across generations to fully participate and enabling women’s access to expression and decision-making by promoting a gender-inclusive media and communication environment that reaches gender equality in media organizations.“

The Bangkok forum took as its reference point the 1995 Beijing Declaration and Platform for Action at the Fourth World Conference on Women. In this statement, the United Nations identified gender inequality in media – in access, representation and the dearth of female decision-makers – as a key area of concern.

In the closing session of the conference, UNESCO’s Assistant DG, Janis Karklins, highlighted how the GAMG could contribute to the Post-2015 Development Agenda and to the UN Conference on Women in 2015.

Corletha Ollivierre, Director of the Board of the Caribbean Broadcasting Union, applauded the framework of the draft GAMG, stated that “The Global Alliance starts today, with all of us in this room linking with other partners to make sure things happen.” She further said that, “Media houses are not the enemies of civil society. We have to try to find ways to engage constructively. We must work together to bring about the transformation that is needed.”

Philomene Aboudou from the African Union of Broadcasters agreed that the GAMG served as a valuable forum for cooperation and a long-needed mechanism to advance one of the key areas of concern in the Beijing Plan of Action. “In Beijing, we talked about media and gender, but did not take further action. After this event we will have an important mechanism to work together on this with UNESCO,” she said.

Adama Lee Bah, President of Young People in the Media and youth representative on the steering committee called for young people to have a voice in the GAMG and for older generations to be open to this important voice. “What we want… is [a platform where young people can have the confidence to voice our thoughts, our dreams and challenges for a better future.”