Announced at the Cannes Film Festival, the Film4Climate Global Video Competition invites aspiring filmmakers from around the world to express their vision for a sustainable future by creating a short film or video about climate action. The competition calls on filmmakers to explore Climate Action, the 13th goal under the UN Sustainable Development Goals, emphasizing what individuals and communities around the world are doing to promote action, offer solutions and inspire positive change to combat climate change and its impacts. Filmmakers are encouraged to deploy personal narratives that explore fundamental questions such as: What does climate change mean to me? What actions am I taking to mitigate the advance of global warming? What is my Climate Action message to the world?

The competition will be open for submissions through September 15, with the winners to be announced at a high-profile awards ceremony at the United Nations COP22 Climate Summit in Marrakesh, Morocco in November. 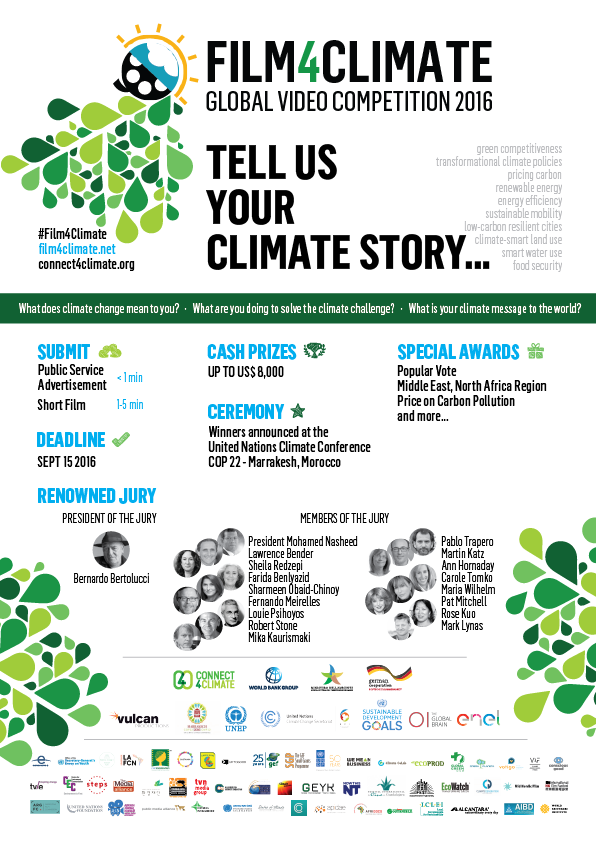 The winning entries will receive cash prizes of $8,000, $5,000, and $2,000 for first, second and third place in each of two categories: an under one-minute Public Service Advertisement (PSA) or a Short Film up to five minutes.

The competition offers filmmakers a chance to have their work reviewed by a jury chaired by Bernardo Bertolucci, and including other preeminent directors, producers, writers and political leaders.

The competition is the outcome of a partnership between the World Bank Group’s Connect4Climate program, the United Nations, Vulcan Productions, and the Italian energy company Enel, which has endorsed the UN’s Sustainable Development Goals and targeted carbon neutrality for its operations by 2050. Other presenting partners include the UNFCCC, UN Sustainable Development, UNEP, The Global Brain, and the Government of the Kingdom of Morocco. In addition, more than 50 collaborating partners, including AIBD, are supporting the competition.