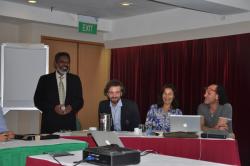 The regional workshop organised by AIBD and supported by the French Government and Canal France International (CFI) was held in Singapore from 4 – 6 December 2012 and attended by 13 participants from eight countries.

The regional workshop organised by AIBD and supported by the French Government and Canal France International (CFI) was held in Singapore from 4 – 6 December 2012 and attended by 13 participants from eight countries. 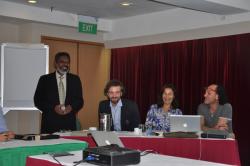 Taking place during 2 days and a half in Singapore, this workshop conducted by two French consultants, Romain Cousi and Christophe Gasse, was aimed to make an overview of existing strategies regarding new media, plus a short presentation of entertainment formats aired today in France.

As purposed, the issues addressed during the first two days not only were a large panorama of many examples of what French broadcasters do online to support their entertainment shows (such as Amazing Race, Dancing with the Stars, France got talent, etc.), but also a immersive moment to analyse their strategic approaches regarding this new dimension. Having an online presence is definitely not on option today for a traditional TV player, but what is it an answer for actually? What is the alleged purpose? Gaining audience? Diversify the sources of revenues? Playing a role in the new online competition? Before considering developing specific programs or dedicated services for both online sites and mobile devices, the first stage in this workshop was trying to understand and underline the main differences and options choses by French broadcasters, whether they were private or public, as well as French producers. They all do not necessarily share the same objectives: some of them are just in a defence mode to try to keep the viewers or get them back to television, whereas others, most of them private, decided to spread their ambitions to a brand new field, just considering the advertisement budget would ultimately arise there so they need to follow the brands where they might wand to invest…

Basically, the main two days was a interesting mix of informal discussions between consultants and participants, displaying business information and sharing everyone’s experience in their new media involvement (goals, encountered difficulties, hesitations…), plus a great variety of illustrated examples through paperboard schemes, web surfing and video watching. Interactivity was thus a key element of this disruptive workshop which was designed to help every participant to properly handle what will be nothing less a major change in the 5 coming years in their core industry. Who is going to lose hand? Who is going to be the greatest winner of this turmoil? Should one build partnership with Youtube or ally against this so-called enemy? Is a war sleeping? Is this just a revolution in the usage but not in the content? What are the best tools and perspectives to consider to be properly prepared to the future? If no strict answer could possibly be given for sure, at least many good questions were asked and shared, with probably as many possible ways to approach them, which hopefully was a useful insight for each present participant, according the nice feedbacks we could hear after the session.

We are now convinced such workshops could be of great interest in the coming months and could probably be the subject to longer sessions of several days. As said in an online video watched during the workshop, “The war is not over”…

In the afternoon the participants attended the Asia Television Forum 2012.